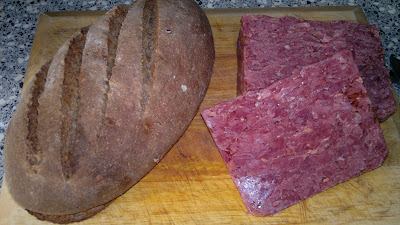 I developed this recipe after interviewing butcher George McCartney about his hand made corned beef which was named Supreme Champion in this year's Guild of Fine Food Awards.

He was kind enough to ship me some over from his shop on the outskirts of Belfast, mentioning that his favourite way to eat the beef was with homemade rye bread. Its such a delicious, special and painstakingly made product that I thought the very least I could do to honour it would be to make some rye bread of my own to go with it.

Barry Hawthorne of the Isle of Skye Baking Co. had also be kind enough to send me off with a parting gift of some ales from the Isle of Skye Brewery when I visited him earlier this year and it seemed the ideal opportunity to put one bottle of it to good use. The results were spectacular even if I do say so myself. I hope when you try making this bread that you agree. Just make sure you’ve got some of that corned beef to enjoy with it (list of stockists here ).

Method
1. Heat the ale and water in a microwave for 30 secs or until tepid. Alternatively heat gently in a pan.
2. Measure the remaining ingredients into the bowl of a Kitchenaid mixer. Afix the dough hook attachment and mix at the lowest setting to combine.
3. Slowly pour in the liquid and mix for 5 minutes on the lowest setting. Turn the machine off and scrape down the hook with a flexible spatula. Mix for a further 5 minutes or until the dough has come together and looks bouncy and alive.
4. Turn out onto a lightly floured surface and knead gently but firmly into a ball. Set aside in the cleaned bowl, covered, in warm draft-free place for an hour or until doubled in size.
5. Knock back the dough, divide into two and form into a loaf shape. Cover and allow to rise again for an hour or until nearly doubled in size.
6. Bake in a hot oven (about 200 to 220°C for a fan oven or 240°C for a normal oven) until nicely coloured. Cool fully on a rack before slicing and serving with McCartney’s of Moira’s corned beef.
Labels: Recipes