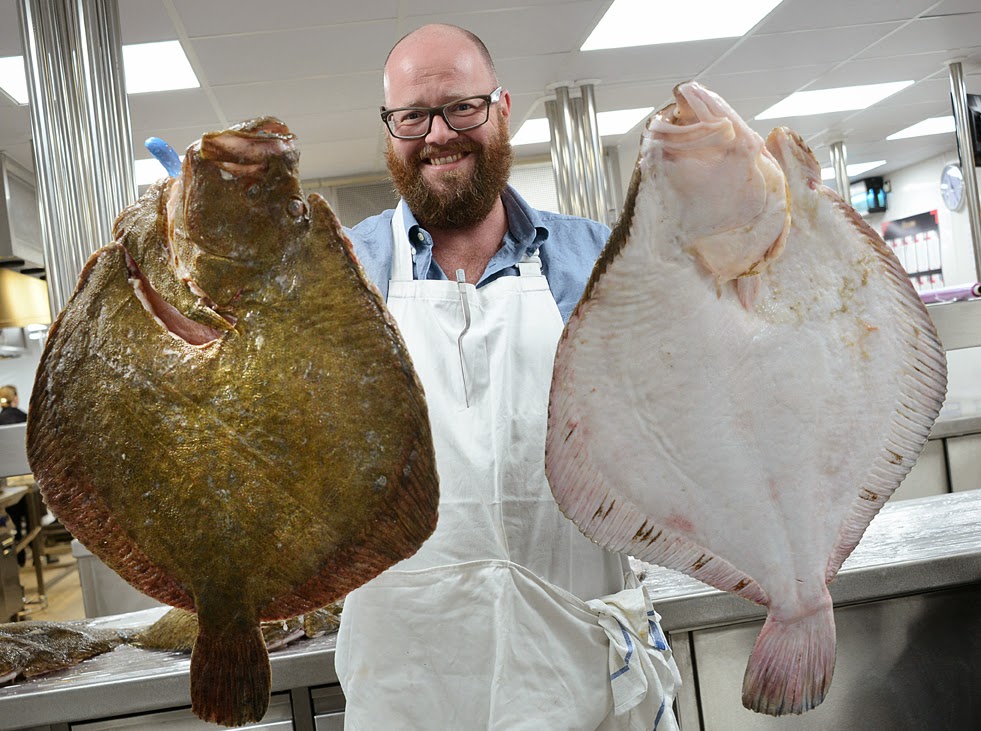 On a crisp Thursday afternoon in January, the recently and impressively refurbished kitchens at Northcote country hotel reverberate to the sound of Adam Ant. Guest chef Paul Cunningham of Henne Kirkeby Kro in Denmark interrupts preparations for his seven course dinner to be served that night as part of the hotel's annual Obsession festival, to re-enact the 80's pop star's Prince Charming dance routine as immortalised in the famous video. As Cunningham strides regally across the kitchen, his moves are surreptitiously videoed on iPhone, to be replayed to everyone's great amusement at the champagne reception where Cunningham will mingle with the guests while sipping a glass of Louis Roederer that's garnished with a whole black truffle.

It's a scene that sums up the joyful nature of Obsession, an event that over the last 14 years has grown from four nights to ten nights of guests chefs travelling to Langho on the outskirts of Blackburn in the North of England from around the UK and Europe to cook with chef and propriator Nigel Haworth and his brigade.

'They tried to get hold of Rene Redzepi and they couldn’t so they asked me,' jokes Cunningham, who first cooked at Obsession in 2007. 'It's always fun and they're always very hospitable. January to March we're closed so I guest chef in the winter. Its just nice to catch up with some friends - you don’t do it for the money but the PR value is priceless.'

For Haworth, who owns the Northcote group (that also includes the Ribble Valley Inns pub company) with business partner and wine expert Craig Bancroft, the hospitality that Cunningham enjoyed is a key to the event's continued success. 'I cooked at an event a few years ago and you feel like a piece of meat. You just go, cook, come away and think, I wouldn’t do that again. But if somebody loves you a bit and shows you why the area and suppliers are important to them and why the chefs should want to come and absorb some of your skills, its a great thing. I feel very honoured because so many people say they would love to do it.' 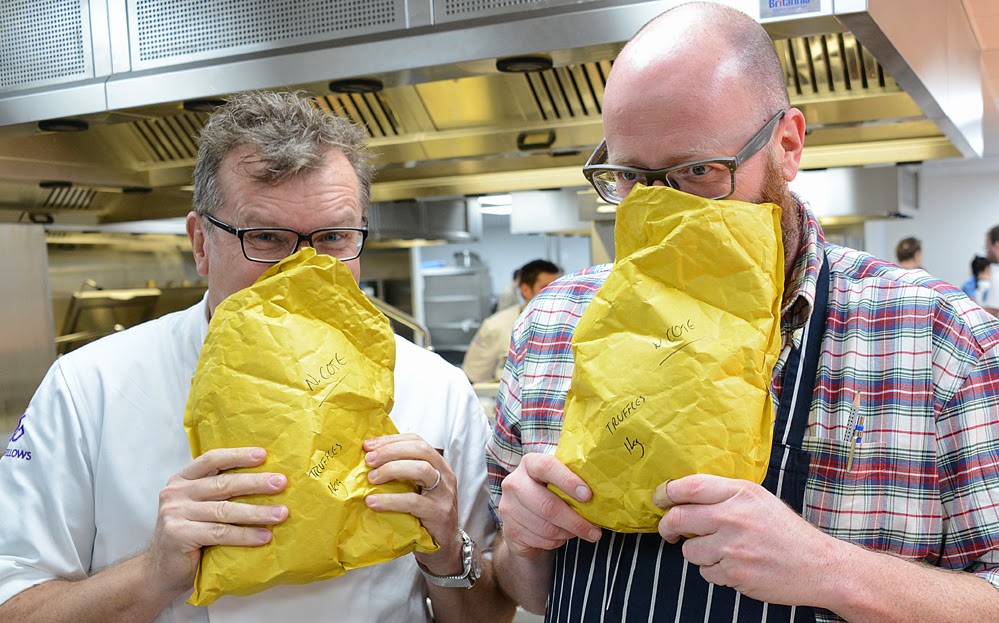 Although Haworth is a proudly British chef (he's championed local produce and indiginous dishes like Lancashire hotpot for more than a quarter of a century), the seeds of Obsession were sown in America. 'I went to the Masters of Food and Wine festival in Carmel and was completely inspired by working with some of the top chefs, the Kellers of this world, and I came back thinking, could I host something like that here? I wanted to create something where I didn’t work my absolute nuts off for December and then lose it all in January.'

Haworth describes the first event in 2001 (billed simply as a Festival of Food and Wine, the Obsession tag didn't arrive until 2006) as 'a suck it a see senario' and had no idea if the four nights that included TV chef Nick Nairn and the Newcastle-based Michelin star holder Terry Laybourne would attract any interest. In the end it was a sell out and Haworth was far more ambitious in 2002, extending the festival to 6 nights and inviting his first overseas chef, Danyel Couet of Fredsgatan, Stockholm.

Despite the good natured vibe, the event is not without its challenges. 'It was chaos,' admits Cunningham. 'My restaurant manager Daniel said its like giving birth to a horse, I don’t know how that feels and I don’t want to know how that feels but it was difficult. I wanted to give the guests a bit of something different. In Denmark I've got this tiny kitchen and we play rock and roll in there. Its nice, its fun and we can do it because we've only got 20- odd guests. But when you're doing 100 lovely guests in three different rooms and you've got to go in and present the food as well it all goes a bit...and it went 'a bit' last night. But things tasted how they should. We made all of the sauces in advance and brought them from home over here and just did the finishing touches yesterday.'

'Obsession is 10 days of 'not-what-we-normally-do,' says Haworth. 'You allow people to express themselves as best they can. You're seeing different characters, some are methodical and some are not, some are really disciplined and some are not and I think that's the wonderful thing about cookery. That's what fascinates me, when I work with someone like Paul Cunningham you see why food comes out differently, because the unorthodox reaches great heights.' 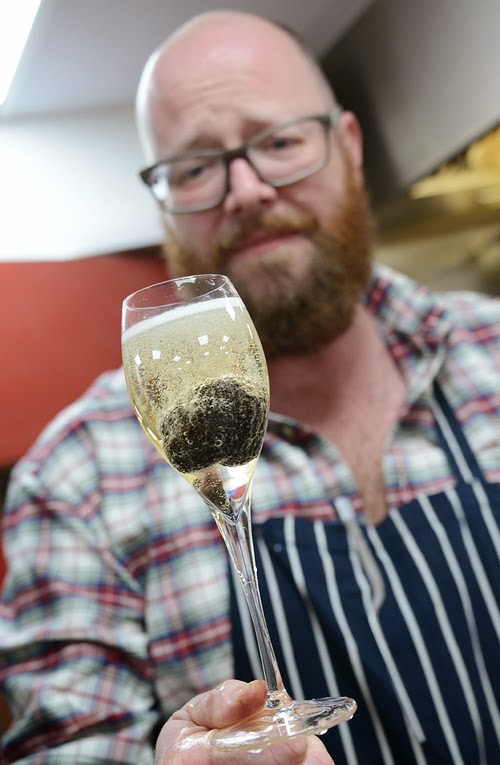 Haworth's customers evidently agree. Dishes like Cunningham's oxtail and Faeno cepe, smoked bone marrow and truffle, and Hvide Sande Turbot with pig ears went down a storm. 'The most expensive item on the menu last night was the turbot at £25 a kilo and the biggest one was 8.8 kilos. Those were maybe six days old, but you need six days with a turbot. I was sat in a Japanese restaurant a little while ago in Tokyo and we had 14 day old, week old and day old tuna. Unbelievable, it was liking eating aged game. It was an amazing experience and you can do it with a fish like turbot, you can age it and it only gets better.'

Haworth describes the administrative, organisational and marketing efforts required for Obsession as 'huge' and credits sales and marketing director Kaye Mathew for her behind the scenes efforts. 'You are a bit tired by the end of the festival, partly because of the excess night activities until about three o'clock every morning, but you are also re- energised because you've had an experience that's very refreshing. Once the cooking's over the hospitality really ignites and it's great that the chefs mingle with the customers and that's what the customers want, people are just genuinely interested in what makes a kitchen tick. We had people dancing in the aisles last night to a point where I couldn’t get the desserts out, it was wacky.'

All images courtesy of Allen Markey

Unknown said…
Crazy ideas!! Isn’t it guys? Hey I love to decorate a venue with proper planning and as per the theme selection by the host. I took help of a professional event planner last week in my official event planning. Every employee was amazed to see like how I planned everything in such a small hall.
24 March 2015 at 02:14

Unknown said…
I must say that i am really impressed to read this article. Really very informative information.If you want more information then check Best Indian Restaurant in NorthCote
1 January 2018 at 04:23