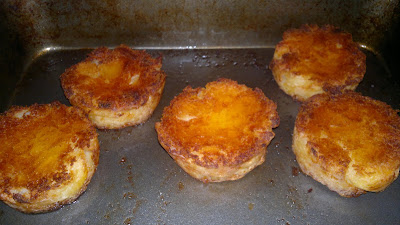 I created this recipe by accident and as far as I know it's original. A few weeks ago, I overcooked the potatoes for the Sunday roast without realising it. I drained them and following the sainted Delia Smith method, shook the pan as I usually do in order to rough up the edges of the spuds which creates the lovely crispy finish that Delia's roasties are famous for.

When I took the lid off I realised my mistake; about half the potatoes were reduced to chunks too small to roast. Rather than waste them, I piled them into a poaching ring to create fat discs of potato and roasted them along with the surviving potatoes. The result was a revelation - they were beautifully crisp, better in fact than the traditional roasties and had a very pleasing texture, somewhere between a roast potato and a hash brown. I've since made them for the family instead of roast potatoes to great approval.

This simple recipe could be embellished with the addition of parsley, rosemary or thyme and garlic mixed into the potato before it's moulded, but I think it works fine as it is.

Pre-heat your oven to 180C. Peel and chop the potatoes into large chunks. Rinse well, then cover with the cold water and bring to the boil. Add the salt and simmer for 5-7 minutes until par-boiled. Meanwhile, heat the lard in a roasting tin in the oven.

Drain then crush the potatoes using the back of a spoon. You want a chunky mixture and not mash. Spoon the potato into a 9cm by 3cm poaching ring, pressing down gently to compoact the potato so that it holds its shape. Repeat three times so that you have four discs.

Place the discs in the roasting tin and baste with the hot oil. Roast for 25-30 minutes or until golden and cooked through, turning halfway to ensure even cooking. Serve with roast meat and all the trimmings.

Vote for this recipe at LoveTheGarden.com
Labels: Recipes

Janice said…
That sounds good. Don't you love it when disasters turn into triumphs!
23 September 2011 at 09:57