The Dinner
(with apologies to Harold Pinter)

A restaurant. A brightly coloured banquette. 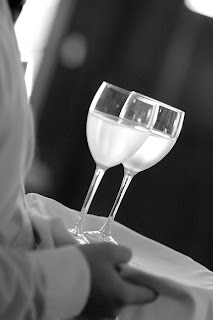 Andre: Have you got beer?

Waiter: We do have beer!

The waiter exits. Andre takes in his surroundings. The large room bustles with life. On the table opposite, a famous theatre director leans towards his companion as if to underline a point. At another table, a group of young thrusting businessmen in open necked shirts talk in loud voices. A lone female diner taps away at a laptop while she waits for a friend.

Waiter: A glass of Alhambra. Can I get you anything else?

He studies the menu.

Andre: You’re not late, I’m early. I’m early for everything. Do you know what they call me?

Martin: No, what do they call you?

Andre: Mr Early. Do you know why? Because I command respect. No one uses my first name, not even my mother. She calls me sir.

Martin: Have you seen the menu?

Martin: What do you fancy?

Andre: I can’t decide between the French bean salad with smoked ricotta and black olive dressing and the sautéed Cornish squid with black rice and aioli. Why don’t you choose for me.

The waiter approaches the table

Andre: (to the waiter) I’ll have the tortelli of cavalo nero and mozzarella followed by sea bream ‘a la plancha’ with coco beans and pesto.

Martin: You’re a man who knows his own mind.

Martin: You know what you want and you go for it.

Andre: I don’t dither. You, on the other hand, couldn’t decide to jump off a railway track if there was a train coming.

Martin: I’m an enigma wrapped in a mystery.

Andre: What’s that on the walls?

Andre: Hasn’t he got anything better to do than hang around restaurant walls all night and day?

Andre: At least they’re not on the menu.

Waiter: If I might make an interjection. I heard you talking about Damien Hirst and I wanted you to know that the butterfly paintings are seven metres long. Michael Craig-Martin, the godfather of the YBA’s painted the wall murals and selected the colour palette for the interior design.

Andre: I can see that. Anyone who has eyes can plainly see that the interior of this fine restaurant has been created by no less an artist than Michael Craig-Martin.

Andre: I’ve never heard his name before in my life.

The maitre’d comes to the table

Maître’d: It’s raining cats and dogs out there, did you get wet?

Andre: I ran between the hailstones. I’m as crisp and dry as a newly printed five pound note.

Andre: That is why this is one of the best restaurants in the whole of London – they know what the standards are and they keep to them. They reach and maintain the highest standards and never waiver from them, do you understand?

Martin: They’ve never waivered, at least not to my knowledge.

Andre: It would be more than his job’s worth.

The waiter delivers the starters.

Andre: My sainted Italian grandmother couldn’t have made better pasta than this.

Andre: She’s from Peckham; in the south. How’s the crab.

Martin: You should try it. The batter is so crisp it will change your life. It’s changed mine already.

Andre: That’s life changing crab; there can be no mistake about it.

He sips his wine.

Martin: Do you know who owns this restaurant?

Andre: King and Corbin; men of integrity, valour and courage.

Martin: The salt of the earth.

Andre: You can rely on them.

Martin: They’ll never let you down.

Martin: They’re no fly by nights.

The waiter serves the main courses.

Martin: I can see that. The lamb is perfect.

Andre: It’s not overcooked, I can see that. It looks perfect.

Martin: There is no way on earth the chef could have improved upon it.

Martin: It’s not all about the food.

Andre: I’ll drink to that, even if it isn’t six o’clock in the morning.

Waiter: Could I interject?

Waiter: It’s just that I heard you talking about the chef earlier. His name is Dale Osborne. I know him; he’s from Bournemouth. He used to work at the Orrery and The Wolseley. Now he works here. He likes cooking Spanish food.

Andre: No one can cook tarte tatin. It isn’t possible, it can’t be done.

Martin: There simply isn’t a physical method known to man.

Andre: The pastry chef has sold his soul to the devil. I know; I was there at the crossroads the night it happened.

Martin: What did he get for it?

Andre: A recipe for pear tatin.

Martin: Not one for rice pudding with caramelised oranges?

Waiter: My grandfather introduced me to the mystery of restaurants and here I am still right in the middle of it. I have a sense of dignity and honour in my work that never leaves me; of service to a cause.

If I may, I’d like to make another interjection…

The Dinner is a work of fiction. St Alban is a real restaurant.